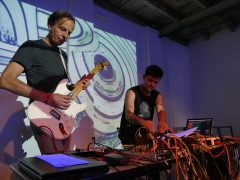 7697 Miles is a project of Cristóbal Rawlins (alias Raw C) from Santiago
de Chile and Dieter Mauson (alias Occupied Head) from Hamburg, Germany.
They knew each other in Hamburg when Cristóbal stayed for three months
in Europe in May 2016. They started to record music in Berlin and later
on in Hamburg in June 2016. Dieter traveled to Santiago and they went on
with their studio work and their first live shows in January-March 2017
. Cristóbal came to Europe for another tour in summer 2017. They
released their debut album ‘Kiñe’ on Attenuation Circuit in Augsburg in
May 2018. The duo were on tour in Peru and went on with their studio
work in Cusco and at KIA (an artist residence in the Sacred Valley of
the Incas) in May/June 2018. The second album ‘Iskay’ came out on Buh
Records in Lima, Peru in September 2020. The third album ‘Cla’ was
released by Spomenik (KinetiK Records) on tape in Greece in March 2022.
An European Tour is planned for this summer. Beside Braille Sattelite
they will play live at Camp Cosmic and Nation of Gondwana. Other
concerts are planned in Germany, Hungary and Slovenia.
7697 Miles, the synth duo made up of Dieter Mauson (Hamburg, Germany)
and Cristóbal Rawlins (Santiago, Chile), two long-standing artists of
the underground scenes of their respective countries. The name of the
project alludes to the distance that separates both geographical places.
Mauson started in the 80s with various industrial and minimal synth
projects. He currently performs as a solo artist under the name of
Occupied Head. For his part, Rawlins, under the alias of Raw C, has
become one of the fundamental names in the most innovative techno scene
in Chile. Their music is inspired by the Andean culture and its ancient
traditions. The music is a wide variety of synthesizers and follow the
lessons left by German electronic music of the 70ths. But they are also
open to ambient experimentations and echoes of techno culture, resulting
in pieces that cover a whole tradition of electronic music, in a true
hypnotic excursion for those who enjoy electronic sounds as a journey to
new territories of sound and psyche.