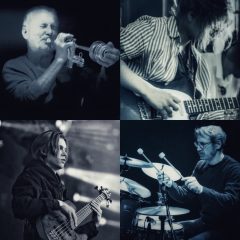 is a Swiss composer and trumpeter of contemporary music and (free) jazz. A warrior of the avantgarde, he has frequented many of the styles that emerged after serialism, especially free jazz and electroacoustic music, with frequent incursion into free improvisation.

His first influences were those of Sun Ra, Alban Berg, Karlheinz Stockhausen and Don Cherry.

An iconic figure of creative freedom, Breuss has combined in his music the most remote influences with a drastic review of popular music. His eclectic style and interest in oriental music make him one of the most unique composers and multi-instrumentalists of the European music scene.

He  has collaborated, among others, with Llorenç Barber, Fátima Miranda, Malcom Goldstein and Christian Marclay and is the (co)founder of the groups Clónicos, OCQ, and Faktor Bossar (with Tsukiko Amakawa.

He is a member of the FOCO, a Madrid-based orchestra of improvisers,  which has collaborated with Fred Frith and William Parker among others.

As a trumpeter he has collaborated, in concerts and recordings, with multiple groups of the Spanish pop and rock scene.

He is the author of about a hundred works, including pieces of electroacoustic and chamber music which  have been played all over Europe, in Uruguay, Morocco, India and in Japan.

In 2012 he was the winner of the XIX INAEM-Radio Classical Radio Creation Competition (Spanish National Radio).

In 2001, he opened the Spanish concert of the SUN RA Archestra in Huesca with his solo performance of “Awake Hu”. In June 2007, he premiered a solo concert for trumpets, experimental electronic sounds and field-recordings and he toured Japan with Tsukiko Amakawa, his co-musician in the Duo FAKTOR BOSSAR.

Markus Breuss lives at the Costa del Sol in Spain, where he is regarded a very special figure in the local high-life. His passion for music is only equaled by his love for Indian cooking. (Victor Nubla).

Klaudija Indriliūnaitė studied guitar in Saulius Sondeckis Gymnasium of Arts in Šiauliai, later earned Bachelor in Jazz from the Vytautas Magnus University Music Academy. Currently, she studies contemporary and improvised music at the LAMT, takes part in various master courses. The guitarist has collaborated with such masters of improvised music as Juozas Milašius and Arnas Mikalkėnas, took part in the LAMT students’ improvised music collective formed by Mats Gustafsson. She has appeared in Jauna muzika, Night of Culture, Night of Museums and Master of Calms festivals.

Dirk Wachtelaer has been playing drums for more than 30 years. He has been active in many genres but his main focus has always been on improvisation and experimentation. He has played with Paul Schutze, Toshinori Kondo, Stevie Wishart, Phillip Clemo, and many others. He recorded 3 solo albums and leads the ensemble Vanishing Pictures, creating music that vanishes when you try to label it.