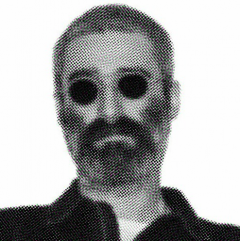 DJ and digger for over two decades, Sacha’s musical culture taps into a wide spectrum of influences.  He is one of those special DJs that manages to find the links between completely disparate kind of music and weave them together to create life changing moments and rich narratives on the dancefloor. Playing a large range of genres from Experimental, Dub, to Early Rave, Jungle, Techno, Acid, or depends of the vibe New Wave, to  post-Punk, Krautrock or weird electronic sounds… His knowledge of rare gems and infectious oddball obscurities is second to none.

He has been a resident at Le Sucre in Lyon (FR) from 2014 at 2016, where he has earmarked his very peculiar style, and has been touring all over the world (pre-covid era) since then.

When he’s not DJing, Sacha runs the esteemed Macadam Mambo record Label in between Lyon and Belgrade, known in the past for releasing incredible edits and now focus on new original music by the likes of Eiger Drums Propaganda, Eva Geist, Houschyar, Steve Pepe, Panoptique, Abschaum, Jin Cromanyon, Zmatsutsi to name a few… and by himself time to time under his S.M. alias via his compilations Danzas Electricas.