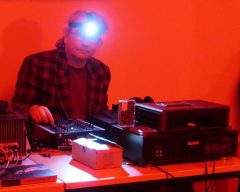 Whether on Radio X, at private parties or in clubs – TAPE DJ EBU has been working as a DJ for quite some time now, and in the meantime he has mainly focused on the medium cassette. At the DJ’s desk, audio cassettes are handled on tape decks, whose original covers can be picked up and viewed by the interested visitor. The “Cassette Culture” is an almost worldwide network of underground artists and labels, which experienced its first beginnings in the 1970s with the rise of punk and new wave. With a repertoire of more than four decades of subculture, TAPE DJ EBU provides underground dancing fun of a different kind – not on the basis of top 40 titles that everyone knows, but on the basis of rarities, obscurities and lots of new discoveries. The interactive bringing of your own tapes is explicitly desired.