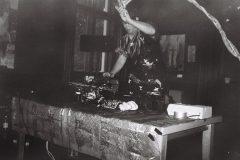 Arma Agharta is the sound performance artist and promoter from Lithuania devoted to improvised and experimental music. He got involved in the worldwide underground more than 20 years ago by publishing zines, running label, playing in bands and organizing shows. Currently Arma performs both solo and in collaborations, also curates festivals in Lithuania.

Since 2007 he has done more than 550 performances all over the world.