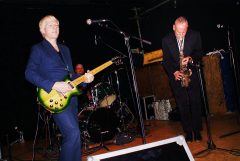 In the 1980s BLURT were arguably the UK counterpart to New York no-wave and were once described as a pyscho-funk afro-punk fake no-wave pogo jazz trio. They have been likened to James Chance and the Contortions, though founder Milton has often ventured further into the avant-garde. The trio have survived more than thirty years of touring and released almost as many records.

BLURT exist in territories where free jazz and art rock coalesce in a punk format. The saxophone and vitriolic poetry surf on tribal rhythms and hypnotic guitar. An early Factory Records signing, BLURT was founded by the poet and saxophonist Ted Milton in 1989 in Stroud, Gloucestershire.

Nostalgic for the 4-track recording experience of BLURT’s first forays in Ted’s brother Jake’s ‘all roads lead from’-Stroud studio in 1982, it was decided, some thirty-three years later, that the band’s sixteenth album should be attempted in the even smaller (less than three meters square) Moriaki Skyway in London’s East End. Ted Milton (sax/vocals), Steve Eagles (guitar) and David Aylward (drums) created arrangements for the songs on the spot, so spontaneity was the order of the day. The only prepared element in the adventure was the lyrics which Milton brought along.