Markus Breuss and the Baltic Connection 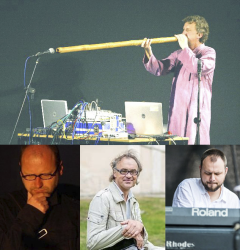 is a Swiss composer and trumpeter of contemporary music and (free) jazz. A warrior of the avantgarde, he has frequented many of the styles that emerged after serialism, especially free jazz and electroacoustic music, with frequent incursion into free improvisation.

His first influences were those of Sun Ra, Alban Berg, Karlheinz Stockhausen and Don Cherry.

An iconic figure of creative freedom, Breuss has combined in his music the most remote influences with a drastic review of popular music. His eclectic style and interest in oriental music make him one of the most unique composers and multi-instrumentalists of the European music scene.

He  has collaborated, among others, with Llorenç Barber, Fátima Miranda, Malcom Goldstein and Christian Marclay and is the (co)founder of the groups Clónicos, OCQ, and Faktor Bossar (with Tsukiko Amakawa.

He is a member of the FOCO, a Madrid-based orchestra of improvisers,  which has collaborated with Fred Frith and William Parker among others.

As a trumpeter he has collaborated, in concerts and recordings, with multiple groups of the Spanish pop and rock scene.

He is the author of about a hundred works, including pieces of electroacoustic and chamber music which  have been played all over Europe, in Uruguay, Morocco, India and in Japan.

In 2012 he was the winner of the XIX INAEM-Radio Classical Radio Creation Competition (Spanish National Radio).

In 2001, he opened the Spanish concert of the SUN RA Archestra in Huesca with his solo performance of “Awake Hu”. In June 2007, he premiered a solo concert for trumpets, experimental electronic sounds and field-recordings and he toured Japan with Tsukiko Amakawa, his co-musician in the Duo FAKTOR BOSSAR.

Markus Breuss lives at the Costa del Sol in Spain, where he is regarded a very special figure in the local high-life. His passion for music is only equaled by his love for Indian cooking. (Victor Nubla)

Raimundas Eimontas is one of the main figures of the early experimental music and non-institutional avant-garde movement in Lithuania, also the center-line of N!N!N! – the free improvisation and industrial noise group. His creative work, full of exploration and improvisation, stays far from confines and tries to break away from the frame of genre or paradigm of the sound, lets the music develop intuitively, without any intended structure, letting to unfold itself as a kind of meditation form. His multiple oeuvre gripe among experimental, psychedelic, electronic, improvisation, jazz, rock and other alternatives, and it always can be seen as an expedition of sound.  (Ilona Klimaitytė)

Besides in Lithuania, he performed in Germany, Denmark, France, Switzerland, the Netherlands, Belgium, England, Latvia, Finland and Norway.

He also created music for theaters and films; gives lectures and writes in the press. For many years, he is one of the most active creators in Kaunas.

is a professional architect and ex-leader of the noise band NAJ, may be described as the most introvert and acousmatically oriented Lithuanian sound artist who rejects any notion of music’s visual aspect. He reduces his sound material, consistently and deliberately, almost to the point of extinction where tonality and even rhythm become eliminated. Čiuta ‘s ‘typical’ mode is radically rarefied, architectural and meditative, akin to the ideology of microsound, and focuses more on silences between the muted sounds than on the sounds themselves. (Jurij Dobriakov)

He lives and works in Kaunas, Lithuania. He started working creatively with sound in the eighties of the last century.. He has taken part in numerous collaborative projects in the fields of sound art, sound installations, experimental music, and contemporary art. Subtle sonic structures, conceptual attitude, spatial perception of sound; refined electro-acoustic treatments (including field recordings)  and minimalism are the trademark features of his works.

is  a Lithuanian pianist, drummer, accordeonist and composer. He plays jazz, free improvised, experimental and electro-acoustic music. He  is often described as seeking to transcend boundaries through a distinctive relationship with other musicians/creators.

He now teaches at the Kaunas, J. December Conservatory, LMTA and his “Jazz Academy”, in various European music academies and he is the artistic director of the studio “AGATA Windows”.

Arnas  is one of the most active performers in the field of free improvisation, avant-garde jazz music in Lithuania. He is also a group leader and composer who works  in theatre music.

Arnas   appeared on stage  with such personalities as Kenny Wollesen, Lasse Lindgren, Michael Moore, Ludwig Mockup, and many others. He is also a member of the group “Openwork Berželiai”.