Unfortunately, the festival is not going to happen this year. It is too complicated to arrange Braille Satellite kind of line-up under existing limitations and uncertainty. All of you who got the tickets already, can get the money back, or use the same ticket next year. As well you could use the amount spent on the ticket for entering all concerts and events we’ll organise over the year. If you are in a rush please e-mail us info@braille-satellite.pro to say what you prefer. We will be soon contacting you personally. 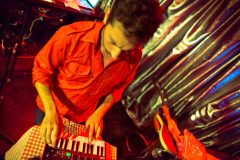 Manu Louis is Belgian, lives in Berlin and escapes from winter in Spain. He travels with a village of electronic instruments and video projections from pop stars or animals to deliver passionate performances that eventually switches gears into an impromptu discotheque that gets the audience moving. His music mixes high and low culture to create provocative and decontextualized juxtapositions. His general blueprint remains the same throughout all of his efforts, but the ingredients he uses may vary: from dissident chanson française, genial dilettante, avant-garde composer, new beat, old hit, art-pop & hard bop. Cream Parade, his new album (Igloo Records) is a disoriented walk led by synthesizers and follows Kermesse Machine (2017) his first album. The last two years he performed at over 200 festivals and clubs across Europe and Asia. Apart from his solitary activities, ultimately Manu also has composed music for the 30 piece ensemble Orchestra Vivo, L’Orchestre de chamber Liège, Plastic Fanfare (a group of 200 winds & percussions), Spanish artist Escif and Chinese band Dawanggang..