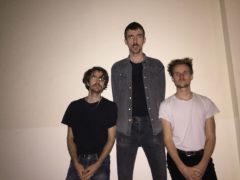 Steppenkind is building a bridge between nightclubbing and live concerts.

The Berlin Trio is merging a variety of synthesizers, electronic and acoustic drums, mesmerizing electric guitars and distinct spoken word on top, all performed live.

They can be soft, psychedelic and emotional with warm bass-drones, echoes and jazz drums, but it can also fully escalate into Berlin-techno infused raves and improvised krautrock.

The lyrics are delivered with intensity and an immersive stage presence by Irish native Brendan Cleary, who came to Berlin as a writer and found his way into making music. Live drums as well as uncountable sequencers, arpeggiators and cables are handled by the amazing chemistry between Hotte Schulz and Can Winter, who have been making music together for a long time now.

Early 2018, they released their 7-track debut album „Walk Along Your River“. Since then the band has been playing consistently in clubs in and out of Berlin almost every month. They’ve also been playing at underground and overground festivals such as Fusion, Wyspa, Solarium, Funkloch, Sublet (Jerusalem) and many more.

All their Recordings are self-produced and recorded in their own studio in Berlin. They’re constantly trying to perfect their unique sound and being autonomous is giving them the space to do so.

All the songs revolve first and foremost around the narrative of the voice and guitar. But often compositions are birthed by the bass sequences of their Moog synthesizer, which will demand a certain kind of pulse or beat. From there it is handed over to the the melody, where the classic 80s Juno synthesizer is effortlessly closing in on the arrangement, accompanied by even more sequencers and synthesizers. Together they are capable of creating all kinds of soundscapes, each to an immense degree of intensity.

2020 is the year of the second album „Undefined Lovers“ which is already announcing itself here and there on youtube. It will finally release all the songs that have been making the live shows unforgettable.