The Plastic People of the Universe 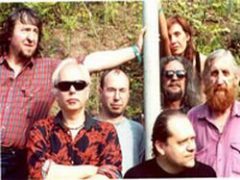 The Plastic People of the Universe were a rather innovative but otherwise unexceptional post-psychedelic band. They wouldn’t likely stand out in the history of modern music were it not for their completely remarkable story of persistence in the shadow of suppression behind the Iron Curtain in post-‘Prague Spring’ Czechoslovakia. Their story is one of vision, and serves as a symbol of the power of human will in the face of soulless oppression.

The Plastics were born amid the Soviet invasion of Czechoslovakia in late 1968. They were formed by bassist Milan Hlavsa, already a veteran of local bands THE UNDERTAKERS, NEW ELECTRIC POTATOES, and FIERY FACTORY. Hlavsa recruited former schoolmates Jiøí Stevich, Michal Jernek, and drummer Pavel Zeman into the original lineup. In addition to a repertoire of VELVET UNDERGROUND, DOORS, and MOTHERS OF INVENTION covers, the band distinguished themselves with garish face paint, satin togas, and wild original compositions that made up in energy what they lacked in style or complexity.

In the spring of 1969 the band enlisted PRIMITIVES GROUP veteran Ivan Jirous as artistic director, and added former TEENAGERS violist Jiøí Kabes the following year. Around the same time Jirous enlisted the help of Canadian language teacher Paul Wilson to provide vocals and to teach the band English lyrics for their compositions. 1972 also saw the addition of saxophonist Vratislav Brabenec.

The Plastics endured many years of government harassment and persecution, all while continuing to develop their sound and an ardent following while cementing their place as fathers of the Czech musical underground. Having lost state sanction as professional musicians early in the Soviet occupation the band often appeared in the guise of amateur entertainment at weddings, dances and family parties, as well as in the occasional underground festival. Their equipment was often laboriously hand-made, and rehearsals were usually conducted without amplification in the secrecy of friend’s and family’s crowded apartments. Arrangements were typically practiced as individual parts, with the combined works being put together in impromptu fashion only on those rare occasions when the band found themselves with an opportunity to perform on stage.

The band managed to record their first album, “Egon Bondy’s Happy Hearts Club Banned” in 1974, although it would not be released until 1978 in France. Members of both the band and their audiences were often arrested, and at one such underground performance at Budejovice in 1974, state police rounded up hundreds of student fans and band members, imprisoning six and expelling dozens from their universities.

In the spring of 1976 Czech police raided dozens of flats and communal homes; arrested twenty-seven members of the Plastics and other underground bands; confiscated and destroyed most of their instruments and equipment; and seized countless texts, music sheets, tapes and photos. Five members of the Plastics were imprisoned including Jirous, who would suffer three more arrests and convictions in the coming years. By the late seventies several members of the band had relocated to Vienna, where they continued to perform and record. The band would ultimately release “Co znamená vésti konì” in 1981, “Kolejnice duní” the following year, and “Pùlnoèní mys” in 1986. They also recorded but did not release “Hovìzí porázka” in 1984. “Co znamená vésti konì” had to be completely re-recorded after the original tapes were destroyed in a mysterious fire the day after they were produced. The album was ultimately released on the mysterious Canadian label Bozí Mlýn, which was registered in Canada with the same address registered to former band member and friend Paul Wilson.

The band dissolved in 1989 shortly before the collapse of the communist regime in Czechoslovakia. Hlavsa’s subsequent band PÙLNOC launched an American tour later that year and dedicated each performance to the still-jailed Jirous. In 1997 the Plastics reformed for a triumphant tour of their homeland and recorded the live CD “1997”. Milan Hlavsa died of cancer in his home town of Prague in 2001.

THE PLASTIC PEOPLE OF THE UNIVERSE were an inspirational force for underground music in the former Soviet bloc, blending jazz, blues, folk, and avant-garde compositions into an eclectic and unique sound that celebrated art, expression, and life. While many bands boast more refined pedigrees, few (if any) can claim to have sacrificed more in their dedication to freedom of expression. For this reason, the Plastics are an undying symbol of rock in opposition, and are highly recommended for all students and fans of progressive music of any kind.