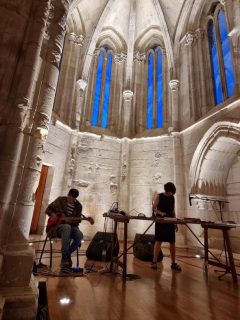 Languidly, the spaceship TELECTU kissed the BRAILLE SATELLITE planet’s surface.
The gold speckled river was like a thousand stars – a firmament of branches: solar winds agitated the fulgent ringlets of water; silvery comets whispered amidst the velvety leaves of ROTAS.
Each scintillation resonated with a sound intagliated with the radar of the mind.
Far away, the fog of Betelgeuse was almost like a silent OPERA; Aldebaran, closer and more intense showed sparkling clusters; phosphorescent Alpha Centauri yielded fantastic TENET noise, and delightful radiophonic energy boomed from the loom of Cassiopaea as pale lightning stippled fluid Orion with continuous, stridulous and percussive sound.
The rustling river heard on the curve of the Via Lactea ploughed through atonal vegetation – a Magellanic nebulosa of the tree-tops. A burst of a glaring supernova was followed by an empty silence, blinding… and afterwards, glissandi and a sudden agitation of audiovisual leaves, heavily pregnant with sap.
An array of sounds was heard, between infra and ultra resplendescent AREPO rays. Variable, informational sound impulses; sibilant strings.
In textural perspective, one corollary – Tau Ceti – would nudge, eclipse-like, the petals of Andromeda; an anticipation of the microacoustical explosion of a planetoid lodged within a seed. The yellow hang-gliding fall of a meteor floated down from a dissonant treetop as it touched the soil – raising sideral dust.
The concrete and the Imaginary; and on – until the sight became insane with immense sound… the Sun, that same morning, inebriated with audioextravagant SATOR radiation…and at the ends of the Galaxy, mixed with the sounds of Nature, the archaic melody of a vanishing Guitar and an old synth…

“Music!” – Homo Sapiens was not alone in the Universe…

Vítor Rua is one of the key figures of Portuguese creative music, with a career that covers a multitude of idioms and styles – from rock (he was the founder of the hit band GNR) through minimalism, folk, punk, thrash metal, electronic and country music to free improvisation (29 years with Telectu, his duo with pianist and musicologist Jorge Lima Barreto). In this world he has worked (amongst others) with Sunny Murray, Gerry Hemingway, Han Bennink, Paul Lytton, Barry Altschul, Gunter Sommer, Chris Cutler, Eddie Prevóst, Louis Sclavis, Jac Berrocal, Carlos “Zíngaro” and Elliott Sharp. In the other world, since 1987, he has focused more on classical contemporary composition, writing for soloists, chamber groups and orchestras. Interpreters include (amongst others) John Tilbury, Giancarlo Schiaffini, Daniel Kientzy, Peter Rundel, Christian Brancusi and the Remix Ensemble). He has also written five operas.
Ilda Teresa de Castro is an ecologist, eco-artist and eco-art media researcher. As a musician she is the co-author (libretto) of the Eco-Ópera Multimedia, Descartes Never Saw a Monkey, exhibited in Funchal (2017) and in Évora and Vinhais (2018), where she also plays electronics. She created music for its own eco-art works and installations since 2010 and edited the cd Ecceidade (2013). She participates in some cd´s : Les Femmes Experimentelles (2011). Ressoadores (2009) and Corte de Cabelo (2008). At the moment she develops musical projects in partnership with other musicians, namely Vitor Rua in Telectu and The Banksy’s.